LAS VEGAS ( KLAS ) – With hundreds of elementary and middle school students from all over the state on one giant zoom call the 2022 “KidsVention” kicked off last week with a message from Dr. Jonathan Moore, the Deputy Superintendent of the Nevada Dept of Education, who said:

“It’s so inspiring to see so many Nevada students who are civically minded and involved.”

The non-political political convention got right down to business with high school debate students like Green Valley’s Alahna Burns taking on state lawmakers like Nevada State Senator Scott Hammond on tough issues like: “Should the United States end the use of the penny?”

Alahna was ready with a confident argument to keep the coin:

“Any move to eliminate the penny would hurt people without bank accounts who have no other option and lack the means to make non-cash transactions.”

The KidsVentioneers voted using an online app – and they overwhelmingly said “Keep the penny!”

There was a music video treat from the Sig Rogich Middle School choir singing “Let Freedom Ring” by the late great George Dare.

One of the driving forces behind KidsVention is retired State Senator Joyce Woodhouse. She had kind words for the guest speaker, outgoing Nevada Secretary of State Barbara Cegavske, who at one time also served in the legislature:

“We were on opposite parties, but one of the wonderful things about people like Barbara is: we work across the aisle, we respect each other. That’s one of the things that we’ve tried to show today is that by working together, we can make things so much better for everyone.”

Whether it’s keeping the penny, or deciding if kids should have a 30 minute screen time moratorium before bedtime on school nights (they said no), the whole idea of the event is to get involved, speak up – and work together to solve problems.

I can’t thank Senator Woodhouse and the entire KidsVention team enough for inviting me to be the host.

We always want to know What’s Cool At School. If you’ve got something, let us know. “Cool At School” is under the “Community” tab at 8newsnow.com. Or just email coolatschool@8newsnow.com

Man dead after running into burning apartment in …

Higher potency in cannabis sending consumers to the … 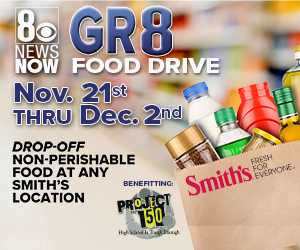 The best deals on affordable tech from Apple to Samsung …

These 100+ Cyber Monday deals have something for …

The best products we’ve tested and loved on sale …

Best gift ideas under $100 and on sale now